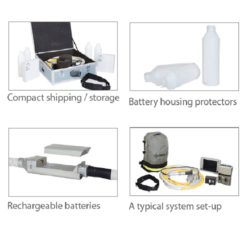 The flexible “snake” like antenna design allows it to be maneuvered easily and efficiently even through the densest and most uneven terrain. Best of all the line antenna do not affect the good ground contact thus able to provide optimum results in the most difficult of environments.

The MALÅ RTA users reportedly confirmed the results showing a significant reduction in survey time and manpower costs using RTA compared to the traditional unshielded antennas. This is due to operator need not clear an access path or route prior to the survey.

The Rough Terrain Antenna is designed to IP65 rating and complies with the European ETSI EN 302 066-1 standard.

A number of accessories are available for the MALÅ RTA antennas, including :

The MALÅ RTA 50MHz is suitable for investigations that require medium to deep depth penetration. This was MALÅ Geoscience’s first antenna in the MALÅ RTA series and has found wide appeal since it was released in 2004 with a proven track record.

The MALÅ RTA 100MHz is suitable for investigations that require medium depth penetration with reasonable resolution.